Armies in Might & Fealty are comprised of individuals, not numbers. Both in manageing your force and in actual battle, everything is handled at the level of the individual soldier.

This allows you to create any kind of army you wish with any mix of troop types you like (or can afford). It also allows damage and attrition to be meaningful instead of statistical. So after a battle, you will find Hans and Frank dead, while Peter and Gustav have been wounded and Tyler dropped his shield in the retreat.

While every soldier in your army, is tracked individually, it's not feasible for you to constantly manage the tactics and gear of hundreds of soldiers. This is where Units come in. They let you manage entire swaths of the force under your command, and automate a lot of the more tedious functions.

In addition to individual equipment and status, soldiers also gain experience on an individual level. Experience improves a soldier's effectiveness in battle, with diminishing returns. That means the first few experience points are more important than the same amount later. The first few battles are vital learning experiences for freshly trained troops, while yet another battle doesn't mean all that much to a veteran anymore. But experience improves many other aspects of a soldier's behaviours as well and should not be underestimated. For example, experienced troops are less likely to panic and rout and will instead make an orderly retreat. In other words: They will suffer much fewer casualties on retreat than inexperienced troops.

To recruit soldiers, you need to train peasants in the use of your choice of weapons, armour and/or equipment. You can do so at any of your estates, with the choices of trainable equipment limited by the buildings in that settlement. To train a soldier, you need to have both the production building (where the items are created) and the training building (where using it is learnt).

You can also send soldiers back into training to change their equipment. You could, for example, recruit soldiers with cheap equipment first, and then after some battles send the survivors back to upgrade their weapons and armour to something better (and more expensive).

Equipment gets damaged and destroyed during marches and on the battlefield. Attrition is a part of every war, and often a deciding factor. You can resupply in any settlement where you have resupply permissions. Resupply only requires the production buildings.

You can also resupply from camp followers, see Entourage.

You can station soldiers at your estates or you can have them follow you around as a mobile army. You cannot send soldiers out on their own, they always need to be led by a player character.

As the world we simulate does not have professional standing armies, stationed militia continue to work their old jobs for half of the day and thus contributes to the local economy and resource production. They cannot, however, be used for construction work. Recruits in training need all their time for training and do not contribute to the local economy.

Soldiers can be assigned to and put under the command of other First Ones.

As you can never be certain of loyalties in the world of Might & Fealty, assigning soldiers is always a bit of a gamble. However, soldiers are not items, they have minds of their own, and that works to your advantage. Assigned soldiers can be reclaimed for a limited time. What happens if you do that depends on how long they have been assigned.

Right after assigning them, the chance that they will return to their original master is certain (100%). It falls by 2% every day, so that they will surely remain with their new master (and will no longer be considered "originally assigned by") after 50 days. However, the more they are split in their loyalties, the higher the chance that they will just say "sod it" and go home to their families. This chance is zero at the extremes, but 20% in the middle of this term of uncertainty. The image below illustrates the distribution: 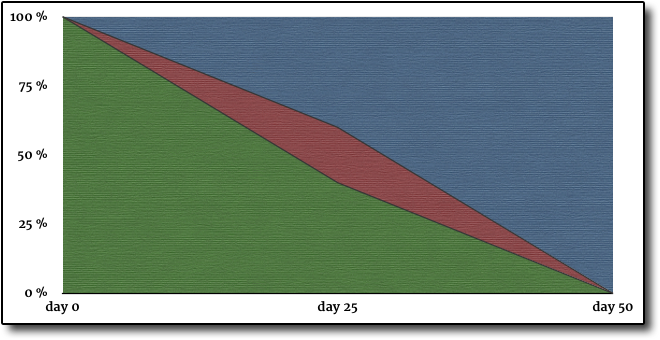 Once the 50 days have passed, they truly belong to whoever currently commands them and he is considered the original master for all intents and purposes.

Troops can also be disbanded at any time, releasing them from service. Disbanded troops will make their way back to their home region, but depending on the distance, some will settle in the region they were disbanded in and some will settle in regions along the way. In most cases, this will not be noticeable, but if large armies get disbanded, for example because a high noble died, this can boost the population in several regions.

Troops also scatter if the character leading them dies. This works the same way as disbanding, i.e. they make their way home or settle somewhere along the way.

When you see blood drops next to a soldier, it indicates that they are wounded. The more drops, the more seriously. One drop is a light wound, two drops are a more serious wound and three drops are a very serious, life-threatening wound. Mostly, over time wounds will heal and disappear. However, there is also a chance that wounds get infected, become worse, and lead to death. There is nothing you can do about that, everything that can be done with the treatments available in this medieval-like world is already being done. But if you notice many wounded after a battle, and then some days later most are healed but there are some dead even though you buried all dead after the battle - it is injured soldiers who fell victim to their wounds.